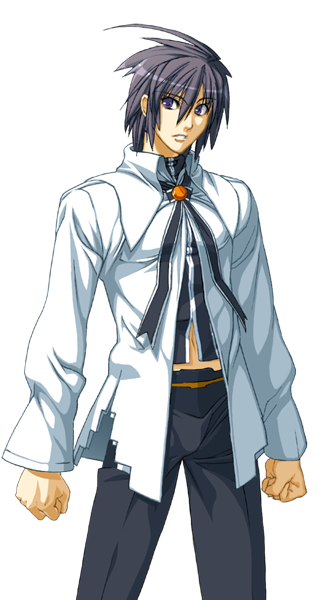 Kurou Daijūji (大十字 九郎Daijūji Kurō?)
Voiced by: Kentarō Itō (anime), Healthy Tarō (PC)
Kurou is the protagonist of Demonbane. He was enrolled as an archaeology student at the Miskatonic University but used this as a cover for his true major in sorcery under the tutelage of Dr. Henry Armitage. During an attempt to break into the library to read one of the forbidden grimoires, he was attacked by Wilbur Whateley and almost killed, causing him to distance himself from the occult and drop out of the university entirely. He continued to work as a private investigator but was financially poor until the day he was hired by the Hadou Financial Group to acquire a grimoire. In his search, he encounters Al-Azif and circumstances force him into a contract with her, becoming the pilot of the imitation Deus Machina, Demonbane (デモンベインDemonbein?). Kurou has a strong sense of justice and morality, claiming that there is no rationale behind his desire to aid and protect others beyond the fact that it would leave him with lingering regrets if he simply abandoned them, a feeling that he describes as "a bad aftertaste". After encountering the inhumanity of Master Therion, he comes to hate the man with a passion, fuelling his determination to destroy the BlackLodge
The power of the Necronomicon allows Kurou to transform into a magius, enhancing his physical and magical abilities to superhuman levels and giving him the ability to fly. The Necronomicon itself is an extensive record of matters relating to the Great Old Ones and harnessing their power in the form of spells, such as magical webbing (Atlach-Nacha), the creation of illusions (the Mirror of Nitocris) and summoning powerful magical weapons (the Scimitar of Barzai). Kurou later acquires a pair of handguns that act as conduits for the power of two Great Old Ones, Cthugha and Ithaqua. Cthugha fires bullets that explode in sorcerous fire while Ithaqua fires bullets that magically track the target's weak points, homing in on them and changing trajectory to avoid the target's defences.

Retrieved from "https://demonbane.fandom.com/wiki/Kurou_Daij%C5%ABji?oldid=4664"
Community content is available under CC-BY-SA unless otherwise noted.