Created by Ruri Hadou's grandfather, Demonbane is a man-made Deus Machina that is almost equal in power to a true Deus Machina. After becoming associated with the Necronomicon it is capable of channeling all of Kurou's spells and weapons on a larger scale. In addition, it possesses Timaeus and Critias, two devices built into its shinguards that can distort time and space, granting Demonbane increased speed and maneuverability as well as short-range teleportation, and can be employed in one of its signature attacks, the Atlantis Strike. However its most well-known attack is the Lemuria Impact, a zero-point sublimation spell that generates infinite heat and pressure. The destructive power of this spell is such that it can only be used with Ruri's approval, via the Naacal Code. Over the course of the story, Demonbane gains the ability to fly and to use the Shining Trapezohedron, an artifact with the power to cut through as well as seal dimensional barriers. 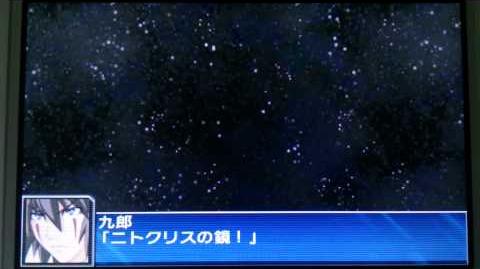