Start a Wiki
Belzebuth (ベルゼビュート, Beruzebyūto') is the robed Deus Machina of the De Vermis Mysteriis and is piloted by Tiberius.

As the Deus Machina of De Vermis Mysteriis, Belzebuth is fittingly summoned through a miasmic magic circle.

Belzebuth's face is a black toothy grimace set on top of a metallic beak, while the rest of its body - barring its hands, feet, and chest – is obscured by a tattered red robe.  Underneath this robe is an abundance of large cables that make up much of Belzebuth's body and a rack in which it stores its Star Vampires.

Belzebuth's method of combat is centered around the more foul practices.  It's standard equipment, the Star Vampires, focus on speed, stealth, and draining the enemy's magic.  In other combat situations, Belzebuth can infect and shut down the enemy's magic circuitry or it can spit an acid that can melt through the target.

1 of 5
Add photo
Acid: From its beak, Belzebuth can fire a powerful acid that burns through whatever it lands on.

Bad Trip Wine: When punching the enemy, Belzebuth can send a shock through the system of the targeted Deus Machina. This shock corrupts the magic circuits with a foul miasma and shuts down several hundred magic circuits.

Cthugha:  For a short amount of time, Tiberius had access to the fragments of Cthugha.  To withstand its power, Belzebuth had to erect and reinforce a barrier.  This form is not as strong as it is in Al's possession.

Star Vampires: The Star Vampires are translucent disk-shaped magic weapons that move fast enough to appear invisible and have optical and magical camouflage. These discs stick to a Deus Machina's body and drains away its magical energy with the disc flashing a deep crimson with every pulse of energy it sucks away.  Not only do these disks absorb magical energy, they can also activate a self-destruction powered by the drained magic.

Vengeful Spirit Bomb:  The Vengeful Spirit Bomb is the weaponized amalgamation of the souls of Tiberius's victims.  Its power is directly proportional to the amount of grudes the souls bear.  Once used, angred and envious spirits spill from the Deus Machina's armor and gain destructive mass.  This malestrom of spirits presses down on the body and soul of the victim.  Loathing and lusting for the living, these spirits attempt to enter the victim's body, compromising it and destroying the target physically and mentally in the process.  Should the initial assault miss, the expelled curses would still cause one of a weaker spirit to go insane and suffer a manic death.

Transformation: Should Belzebuth be in danger of losing, it can undergo a massive transformation. Its armor rusts and corrodes away, allowing for a putrid green juice begin to leak out of it. The armor then shatters like a broken egg, spilling out piles of rotten meat and man-sized maggots. Finally, the machine explodes, releasing a vast black cloud into the sky. Accompanied a loud, inconsistent buzzing sound, this cloud, Belzebuth's new appearance, is a combination of flies and concentrated hatred. Flowing on its surface are the anguished faces of Tiberius's victims.

In this form, Belzebuth can fire concentrated blasts of hatred and can expel a powerful miasma from its body that disintegrates anything that makes contact with it. Due to its regenerative abilities, this form can only be beaten by destroying every last bit of it at once. 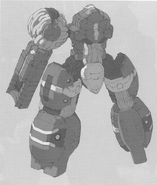 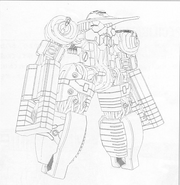 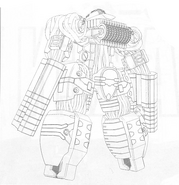 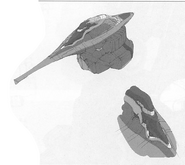 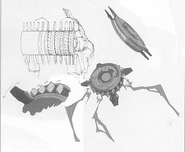 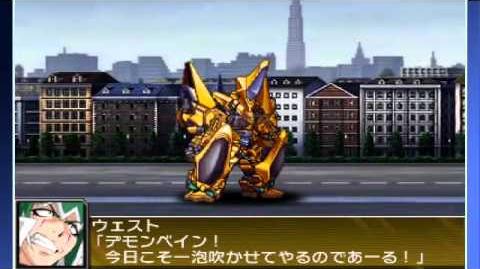